I arrived in Thailand on April 11 and spent the day picking an apartment and shopping for some supplies that weren’t possible to pack such as laundry detergent, pillows, clothes hangers, etc. The next day I flew out to Phuket and then took a cab down to Khao Lak to meet up with some of my coworkers. April 12 was spent settling in at the hostel, exploring the town and having dinner by the water with a beautiful sunset. The next day, April 13, was Songkran which is the Thai New Year. In some areas of Thailand Songkran is celebrated April 14-15 as well since it is still the holiday period but where we were there was only one day of the water festival. We were really relieved about this because even though it was an incredibly fun experience by the end of the day we just really wanted to be dry. 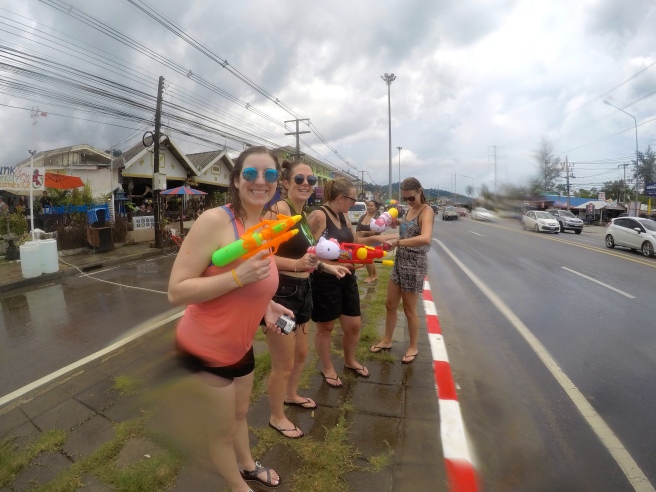 We bought cheap water guns at little shops and all along the streets establishments placed out large buckets of water for people to fill their guns or buckets with. It was just one gigantic water fight. We went to a bar that had the large gallons of water on the sidewalk and then there was a median in the street which is where we stayed for most of the day because the bar was playing music and trucks would drive by with people shooting and throwing water from the back. We were also aiming at the people on motorbikes.

During this fest, if a Thai person likes you they will put a white or colored clay/paste on your face which you can see in some of these photos. It was just honestly such an amazing experience to get to have fun and feel like a little kid again. It is definitely an experience I’d recommend to everyone who comes to Thailand.

View all posts by courtneynclark